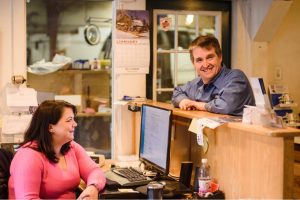 Kristen and Brandon met in junior high and became High School Sweethearts. Brandon started pumping gas at 12 at his grandfather “Charlie Cahill” service station and then later began changing tires for his Uncle Skip. He began to tinker with cars in his Dads garage at that time. He has loved vehicles every since.

Brandon completed the Automotive Technology program at Morse High School in 1996. He went on to get his degree in Automotive Technology at Central Maine Technical College. Then continued to become an ASE Certified Technician. While working at Woolwich Chevrolet, Brandon was presented with the opportunity to buy “Bill’s Garage”. It was Brandon’s dad who heard that the owner of the garage, Bill and his wife Carol, were selling their thriving business. The business also came with a very loyal clientele. However, It was important to Bill and Carol to sell the business to someone that would take care of customers in the way that they always had. The Cahill’s were the perfect match!

Brandon and Kristen bought Bill’s Garage in 2005 with Brandon’s parents. In 2016, they became sole owners. Brandon and Kristen started with 2 mechanics, handwritten slips added up on an old adding machine, and a schedule written on a white board. Since then, they have expanded Bill’s Garage to include 6 bays, 5 mechanics, and have finally moved to electronic scheduling.